History was made on Friday in Yobe State as an aircraft belonging to the Nigerian Air Force, (NAF) made first safe landing at the Damaturu International Cargo Airport.

The aircraft with aviation registration number, NAF 961 made it safe landing in the afternoon; onboard the plane was the Chief Air Staff, Air Marshal Sadique Baba Abubakar.

Governor Mai Mala Buni in an interview with newsmen said the International Cargo Airport when completed will connect the state with the rest of the world.

In his remarks, the Chief of Air Staff, Air Marshal Sadique Baba Abubakar said the airport will serve as a springboard for the air force to efficiently and effectively execute the ongoing counter-insurgency operations in the northeast.

Similarly, another aircraft with aviation registration number N100EK conveying some passengers made another safe landing at the airport and later took off. 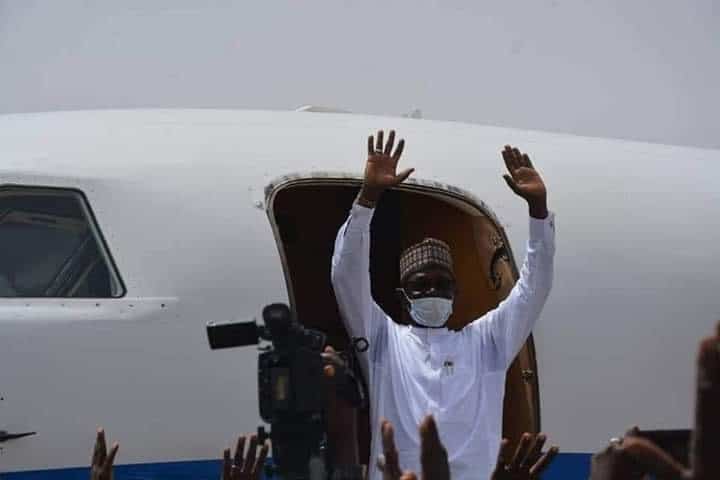 The multibillion Naira cargo airport is now about 80% stage of completion and it is the first of its kind in the northeast sub-region.

Aviation stakeholder who witnessed the landing and taking off of the aircraft at the airport, believed that the facility has the capacity to propel and turn around the economic fortunes of the state by creating job opportunities for teeming unemployed youth and improving the state’s Internally Generated Revenue, (IGR).

COVIDCOVID-19COVID-2019
0
Share FacebookTwitterReddItWhatsAppPinterestEmailLinkedinTumblrTelegramStumbleUponVKDiggLINEBlackBerryViberOK.ruFacebook Messenger
Subscribe to our newsletter
Sign up here to get the latest news, updates and special offers delivered directly to your inbox.
You can unsubscribe at any time