Pelosi (D-Calif.) and Republicans have disagreed on the size of a new pandemic relief bill, and she’s refused White House urging to pass smaller bills with popular items like airlines assistance.

“The massive furloughs and firings of America’s airline workers jeopardize the livelihoods of tens of thousands and threaten to accelerate the devastating economic crisis facing our nation,” Pelosi said in a statement.

“Today, I am calling upon the airlines to delay their devastating job cuts as relief for airline workers is being advanced in Congress.”

Pelosi announced her new position as national news coverage focused on President Trump’s diagnosis with the serious respiratory bug, which since March has infected 7.2 million Americans and killed more than 207,000.

In her statement, Pelosi said, “We will either enact [Transportation and Infrastructure Committee] Chairman [Peter] DeFazio’s bipartisan stand-alone legislation or achieve this as part of a comprehensive negotiated relief bill, extending for another six months the Payroll Support Program. This initiative is focused solely on the workers, keeping them on the payroll so these workers maintain their critical training and certification requirements unique to their industry.”

She said, “As relief for airline workers is being advanced, the airline industry must delay these devastating job cuts.” 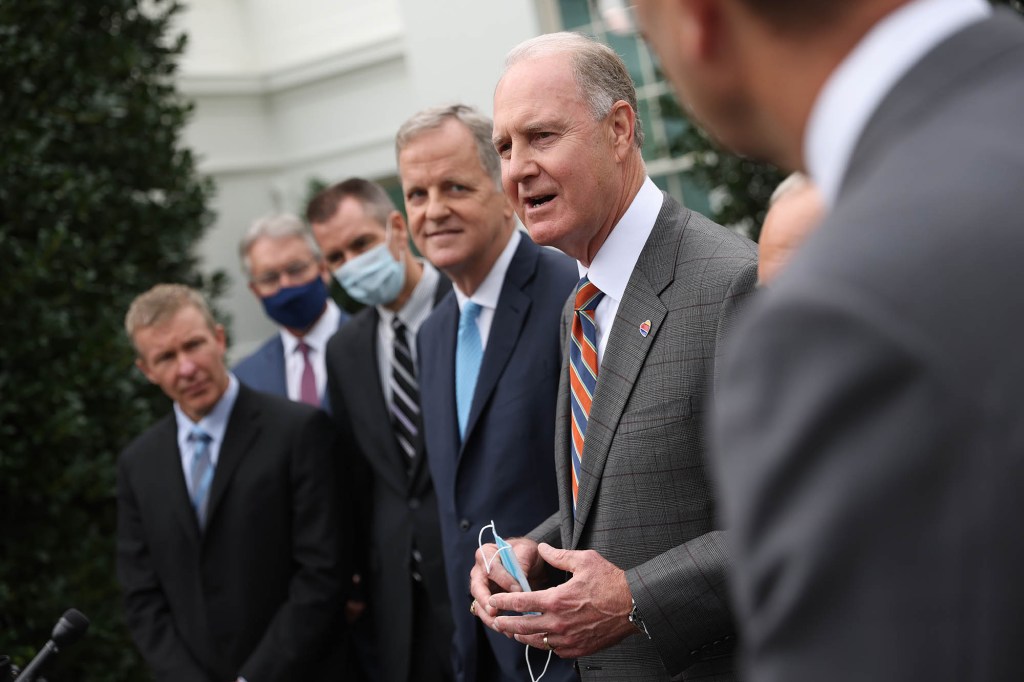 halls with Miley and Dolly!

Pelosi and Treasury Secretary Steve Mnuchin this week met to negotiate a potentially large relief package, but remain divided on the amount of money to give state and local governments, and on the specific amount for a federal unemployment insurance subsidy.

Senate Democrats last month blocked a “skinny” Republican stimulus bill costing about $500 billion that included a $300 weekly unemployment subsidy, $105 billion for schools, $20 billion for farmers, $10 billion for the US Postal Service and $10 billion for child care assistance. It included $47 billion for vaccines and testing and $258 billion for the Paycheck Protection Program, which gives small businesses forgivable loans for retaining staff who aren’t needed due to reduced demand.

Democrats oppose a push by Senate Republicans to include liability protection for businesses in a large bill and want to restore a $600 weekly unemployment supplement, which expired in July and in some cases resulted in people earning more than their pre-pandemic pay.

Trump in August signed an executive order allowing a $400 weekly boost in unemployment insurance payments if states chip in $100, but those funds are almost exhausted. Other Trump executive orders restored a federal ban on evictions, proposed a temporary payroll tax cut and extended deferral of college loan payments.

Trump haters rejoicing in his testing positive for COVID-19

Blessings – Am So Grateful Lyrics