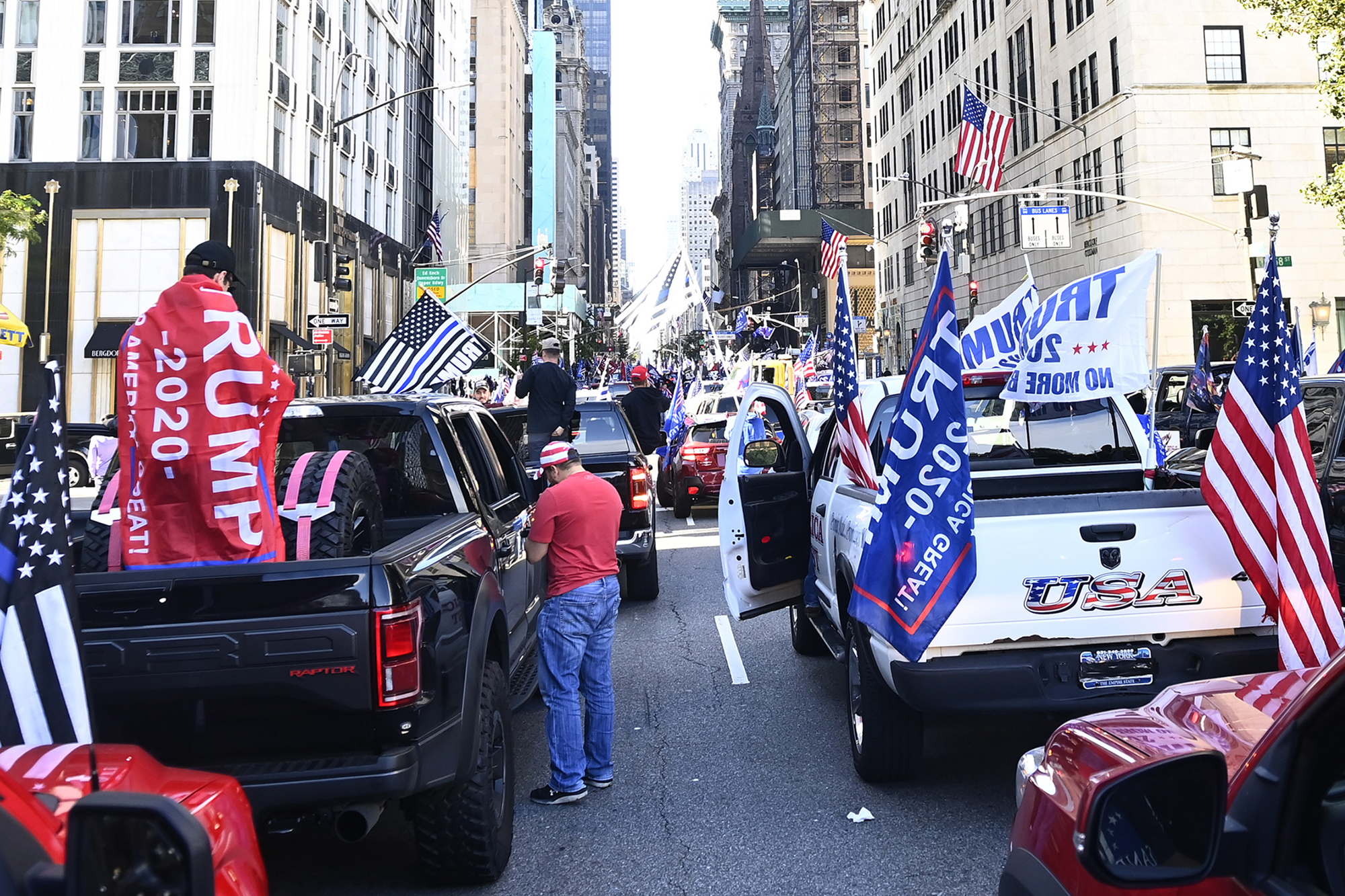 A caravan of more than 100 vehicles driven by out-of-town Trump supporters brought Fifth Avenue to a halt early Sunday — the latest show of support for the coronavirus-stricken president.

The long line of cars, trucks and motorcycles had mostly driven into the city from Long Island — grinding traffic to halt for at least 30 minutes as they arrived to loudly cheer for the president outside his Trump Tower home.

They constantly blared horns and waved flags — with loud chants of “four more years!” in support of the commander in chief’s re-election bid.

The noise stopped for at least a moment as the group called for a moment of silence to send a prayer.

After the silence, he shouted “President Trump, we love you!” — before leading the group in chants of, “USA! USA!”

“There were a lot of cops [but] there was no trouble,” said a local security guard, who estimated she saw the caravan blocking Fifth Avenue almost 10 blocks from 54th to around 62nd Street. “It was peaceful, no stress. Nobody was hassling anybody,” she said of the loud show of support.

As many took to the streets outside Trump Tower, there was also virtually no sign of any masks, either — despite the pandemic that brought them there to show support for the president after his hospitalization.

The main group — suitably called “The Long Island Loud Majority” — had got up at around 4 a.m. to gather in Ronkonkoma and head to the city, according to one of those involved, Jessica Marie Hahnan.

“I felt the love and energy today,” the 28-year-old Trump supporter from Farmingdale told The Post of the “prayer vigil” for POTUS and FLOTUS.

“Today the energy was electric. It was amazing — no chaos, no [middle] fingers, no drama, just supporting our president and our [men and women in] blue,” she said.

Hahnan said being at Trump Tower felt “sentimental” because “we were praying for him.”

“I’m praying for every single person in this world … including President Trump, the First Lady and the whole administration,” she said.

“I pray that my country comes together because we are divided right now. We should be standing together praying for our president and our First Lady. He is still a human being. He is 74 years old,” she said, noting how his age put him in the high-risk group from the disease.

Hahnan said she did not vote in the last election, but is now throwing her support behind the president because “he kept his promises.”

“I’m middle class. He helped my family and a lot of people. My dad is a union worker and his 401K has tripled,” she said. “I think he is doing a good job.

“I know he has so many plans for this country to get back on its feet.”

Since Trump confirmed early Friday that he had tested positive for COVID-19, there have been a number of rallies in support — including outside Walter Reed National Military Medical Center, where the commander-in-chief remained Sunday for ongoing treatment.

“Thank you so much!,” Trump wrote on Twitter, linking to a posting from Dan Scavino, the White House social media director.

Arsenal vs Sheffield United: Ian Wright singles out one player after 2-1 win

Man Utd vs Tottenham: No excuse, you all are pathetic – Gary Neville blasts Red Devils players

Whales, other wildlife species could get COVID-19: ‘Potential cascading impacts’…

De Blasio: Could be weeks before COVID-19 restrictions in hot spots lifted

PSG vs Man Utd: Maguire, Cavani, Greenwood out of Champions…

Our Daily Bread Devotional – Game of Thanks