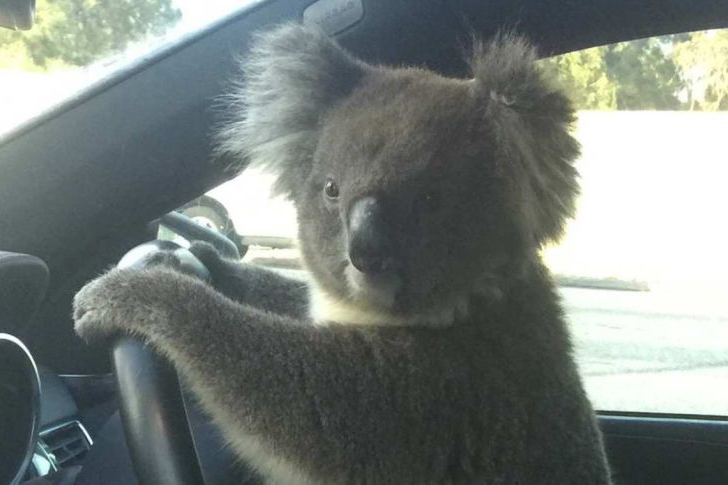 He was just hangin’!

A koala caused a six-car crash when it dashed across one of Australia’s busiest freeways on Monday — prompting motorists to jump to the marsupial’s rescue, according to reports.

A man whose car was hit from behind at around 7 a.m., causing a chain reaction, was the first to get out of his car to try and save the cuddly creature, Guardian Australia reported.

Another driver, Nadia Tugwell, told ABC Radio Adelaide she later saw the furry fiend moving between vehicles on the freeway, not far from the pile-up.

“Then I saw a lady running after it with a blanket trying to catch it,” she recalled.

The two women managed to corner the koala and bundled it up in a jacket before putting it in the back of Tugwell’s car.

Tugwell, who had previously saved other animals from local roads, arranged for the Adelaide Koala Rescue center to meet her at a nearby gas station.

While she waited for rescuers to arrive, the cuddly creature got comfortable in her car — and even hopped behind the steering wheel, photos showed.

“I was sitting there entertaining myself but I had to jump out of the car at that stage when he decided to take over,” Tugwell told Guardian Australia.

A handler from the koala rescue was eventually able to maneuver the marsupial into a bag.

“He was actually quite a calm koala, he didn’t even fight about being in the bag, he was just calm and went into the basket,” Tugwell said.

Ann Bigham, a volunteer at the rescue, told ABC the koala came out of the ordeal “scot-free.”

The animal was set free into the wild less than a mile from the freeway.

“The koala was in really good condition, it was lucky it hadn’t been hit at all and thanks to the rescuers it was kept safe,” Bigham said.

0 79
Share FacebookTwitterReddItWhatsAppPinterestEmailFacebook MessengerLinkedinTumblrTelegramStumbleUponVKDiggLINEViberOK.ru
Subscribe to our newsletter
Sign up here to get the latest news, updates and special offers delivered directly to your inbox.
You can unsubscribe at any time

Bruce Meyers, inventor of the dune buggy, dead at 94