As a hospital chaplain during COVID-19, offering solace is a calling and challenge


For Rocky Walker, chaplain at Mount Sinai Heart at the Mount Sinai Hospital in New York City, prayer and hope are his weapons of choice in the fight against COVID-19.

When the cardiology department where he works converted to an all-COVID-19 unit in March of this year, the change-up was substantial.

“Normally, working in cardiology, we get to know you. It really is a family. We see death, but it’s a rarity. But during the pandemic, I primarily worked in our ICUs . . . people were indiscriminately dying. It’s all we saw. Very few of my patients survived,” said Walker.

Tasked with providing emotional and spiritual support to patients, their families and staff while having to wear personal protective gear challenged Walker’s ability to do his job.

“My face is one of my most effective weapons,” he said. “I use it to disarm hostile patients, to make patients feel comfortable, to show empathy and concern. Now, with a face mask, I’m covering my ability to communicate, but I had to, in order to save my own life. It was a real test of faith.”

With family members not allowed to be at their ailing loved ones’ bedside, Walker grew dependent upon his words to convey compassion.

“Some people lost multiple family members within days of each other,” he said. “I’d FaceTime them, holding up the phone so that they could see their loved ones. I remember how grateful they were. I’d let them know that anyone going into their loved one’s room was trying to make them feel comfortable — that they were never alone.”
Walker’s tough, resilient mindset was key to being able to do his job. Fortunately, this had been ingrained in him earlier in his life, first as a top athlete and captain of his high school track and football teams in his native Kansas City, Miss. He went on to serve in the US Army for 25 years, predominantly as an Apache helicopter pilot until retiring as an officer in 2008.

It was a year later that Walker decided to pursue seminary work at New York Theological Seminary.

“At the end of my military career, I’d seen how God had really blessed me, my body, and with a family of my own,” he said. “I didn’t feel I’d done enough to help society. I wanted to be an extension of God’s love and bring light to other people, as so many others had been light to me.”

The stress and fatigue facing Walker’s co-workers has been hard-hitting, he said.
“Every time you thought it was as bad as it could get, it got worse. At the end of April, tragically, one of the doctors at another hospital was so overcome by stress, this person took his own life. It scared me to death. I went to my leaders and colleagues and we put together COVID fatigue training. Beginning in May, we offered 20-minute services, from breathing and writing techniques to electronic foot massages, to letting employees speak about their experiences. Everyone from doctors to housekeeping took part. It was very successful.”

As for his own self-care needs, Walker said that “the most effective coping device was coming to work. Having something to do, being so busy — without time to think — and not focusing on myself, this was the best way. It’s a genuine calling from my heart to help others.” 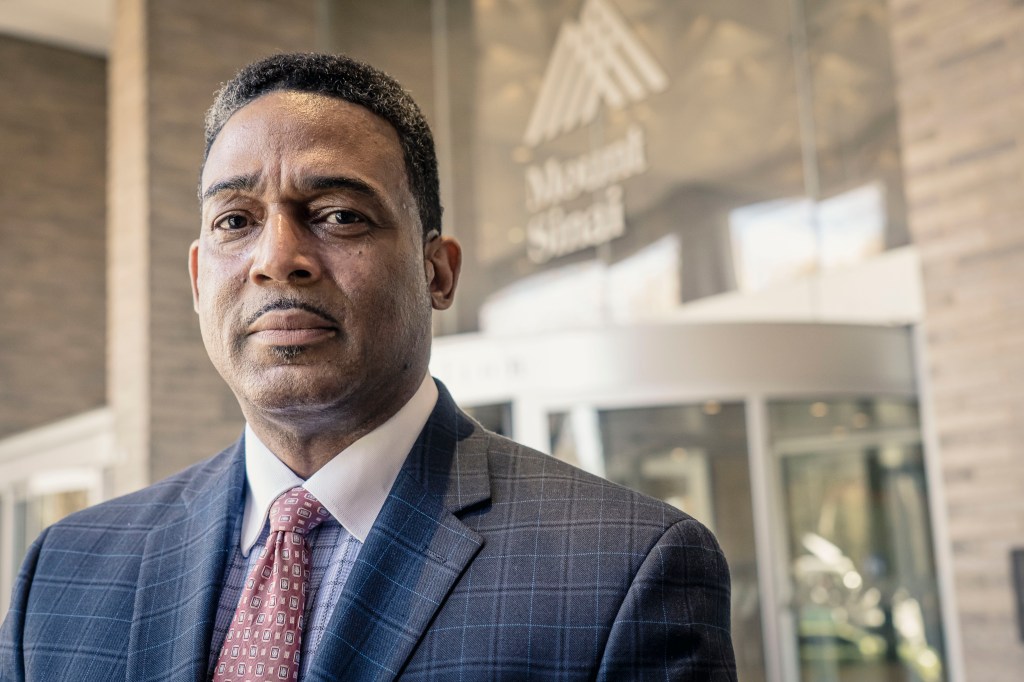 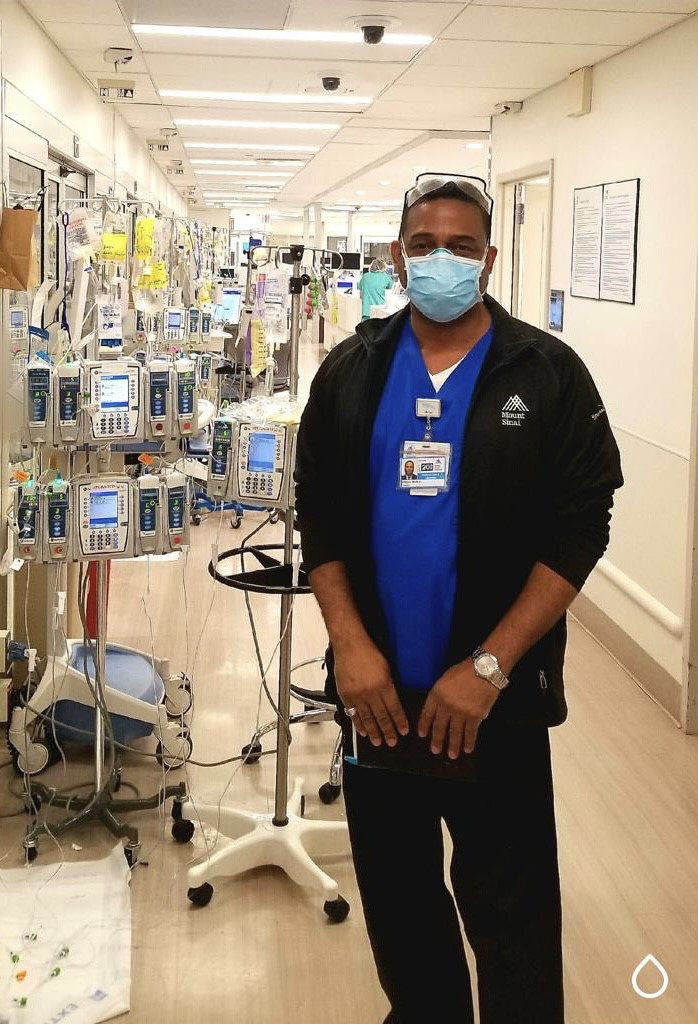 Walker in the ICU.

However, learning of fellow staffers who passed away from COVID was brutal, said Walker.

“Someone who worked in one of our other units passed. She’d been here for a long time. We gathered everyone and encouraged them to express their feelings. The way she was spoken of and cared about — although I’d never met her — I couldn’t help but feel their pain and anguish,” said Walker.

With his current employer since 2014, “My whole life set me up for this work,” said Walker. “Summer training, field training exercises, getting ready for the big game or big campaign. This was so much like war for me. It took courage to get up and come into our hospital building every day, knowing that so much sickness was here and how highly contagious the virus was. It took the same energy and same muscles.”

The rewards of Walker’s spiritual work continue to present themselves.

The Long Island resident, who is in his 50s, presides over Multicultural Congregation in Queens Village. He became so sick that he ended up at Mount Sinai. Placed on a ventilator for 45 days, Thomas’ family was advised of a grim fate by medical staff.
Chaplain Walker was on hand.

“I rounded Mr. Thomas every day. I prayed for him, as I do for everyone,” said Walker.

On April 19, the medical team called Walker and told him Thomas wouldn’t make it through the night. He rushed to the hospital, stood by him and prayed to God.
Miraculously, Thomas’ condition began to reverse, and he began to respond to treatment.

“I came out of coma and my wife was standing next to me,” said Thomas.

Having left the hospital after over three months of care, Thomas is physically still very weak, but other than occasionally using an oxygen machine at home, “I have zero effects from my experience,” said Thomas.

Thomas is thankful — especially to Walker.

“Chaplain Rocky Walker played a big role standing by me every single day, even in rehab,” he said. “He showed care and compassion. When he talks, you can feel his passion. He’s real, genuine. His positive energy is in the atmosphere. That’s Chaplain Rocky.”

While others may view Walker’s efforts as heroic, Walker said, “I don’t feel like I’m a hero. I’m doing what I’m trained, paid and called to do. My resiliency is not based on my own strength, intelligence or athleticism. It’s based on my faith. I know whatever is coming, it’s my privilege to be of service to God and his people.”

callingchallengechaplainCOVID19hospitalofferingsolace
2
Share FacebookTwitterReddItWhatsAppPinterestEmailFacebook MessengerLinkedinTumblrTelegramStumbleUponVKDiggLINEViberOK.ru
Subscribe to our newsletter
Sign up here to get the latest news, updates and special offers delivered directly to your inbox.
You can unsubscribe at any time

As vaccines roll out, doubters rush to take credit

Clear communication skills can breed success – how Toastmasters can help

I interned in Trump’s White House – am I now unemployable?

Why you shouldn’t believe US college rankings or tuition prices

Instagram influencers among first to get COVID-19 vaccine in…

MFM Daily Devotional 18 January 2021 – Navigating Through A Season Of…

Rhapsody of Realities 18 January 2021 — The Glorious Result Of His…