It’s the end of an era for Teresa Giudice, who has finally found a buyer for her $2.2 million Montville, New Jersey, mansion, The Post can report.

The sprawling estate has been on and off the market for the past year with no offers.
In January, the “Real Housewives of New Jersey” star, 48, was forced to slash the price of her longtime mansion from $2.5 million to just under $2.25 million, hoping to entice a buyer.

She also brought in interior designer Jimmy DeLaurentis to completely change up the home’s decor.

An offer was made on Monday, and the house is currently under contract. However, a source tells The Post that it could take a couple of months before the deal on the property closes.

A rep for Giudice has not responded to The Post’s request for comment.

The two raised their four kids in the home until 2014, when the couple was convicted and ultimately jailed for bankruptcy fraud, conspiracy to commit mail fraud, wire fraud and failing to pay taxes. Teresa served her time in 2015, and Joe began his sentence in 2016.

A turret-like entryway and a Juliet balcony create a regal exterior to the palatial home. 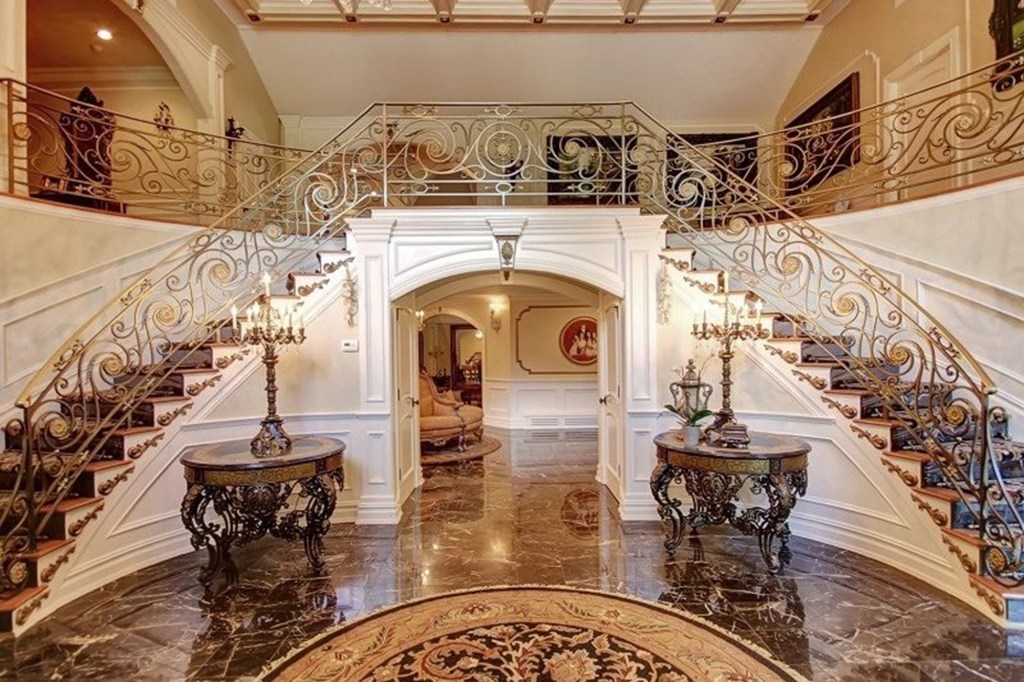 The inside of the front door has sculpted wings as handles, opening onto a black marble floor and a two-story foyer with a Cinderella staircase. 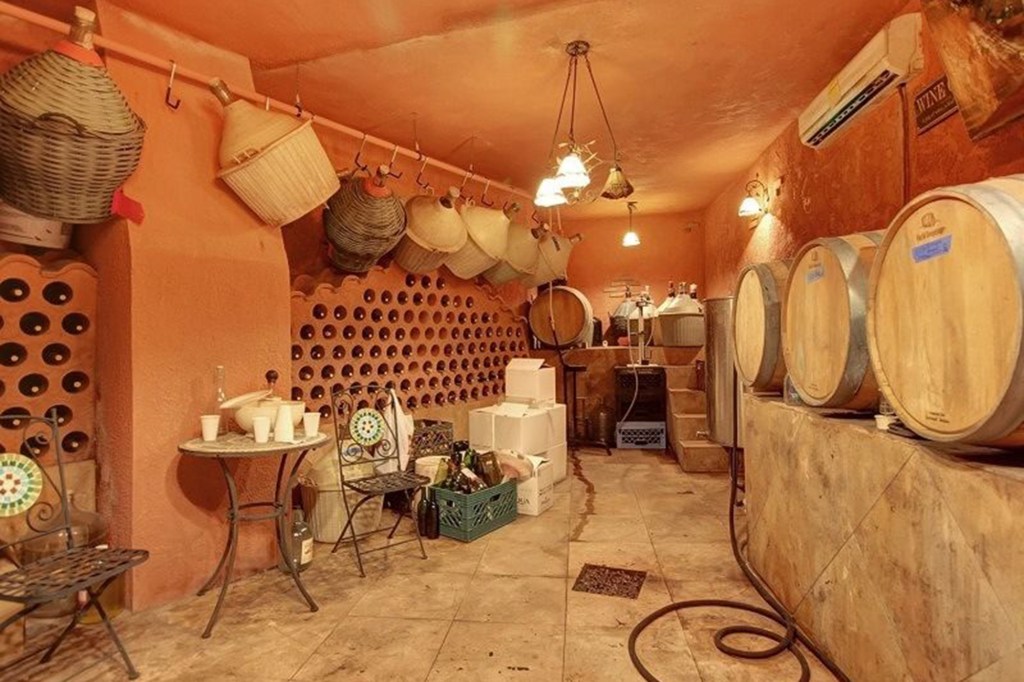 The wine cellar is pictured. Classic Italian touches are prevalent throughout the house — for instance, one bathroom is inscribed “bagno,” which means “bathroom” in Italian. 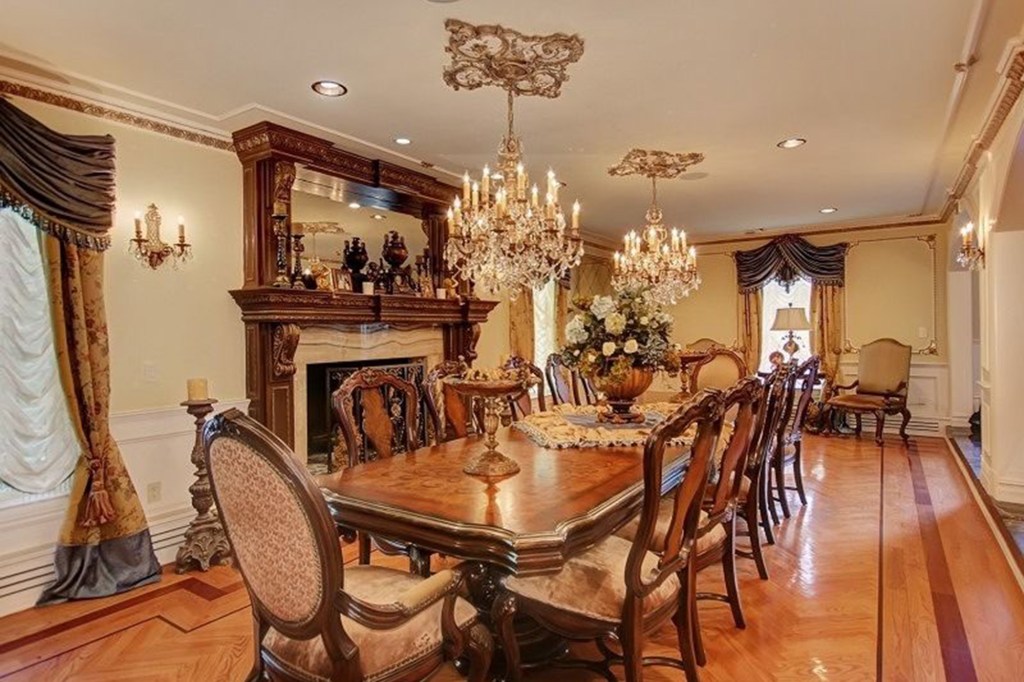 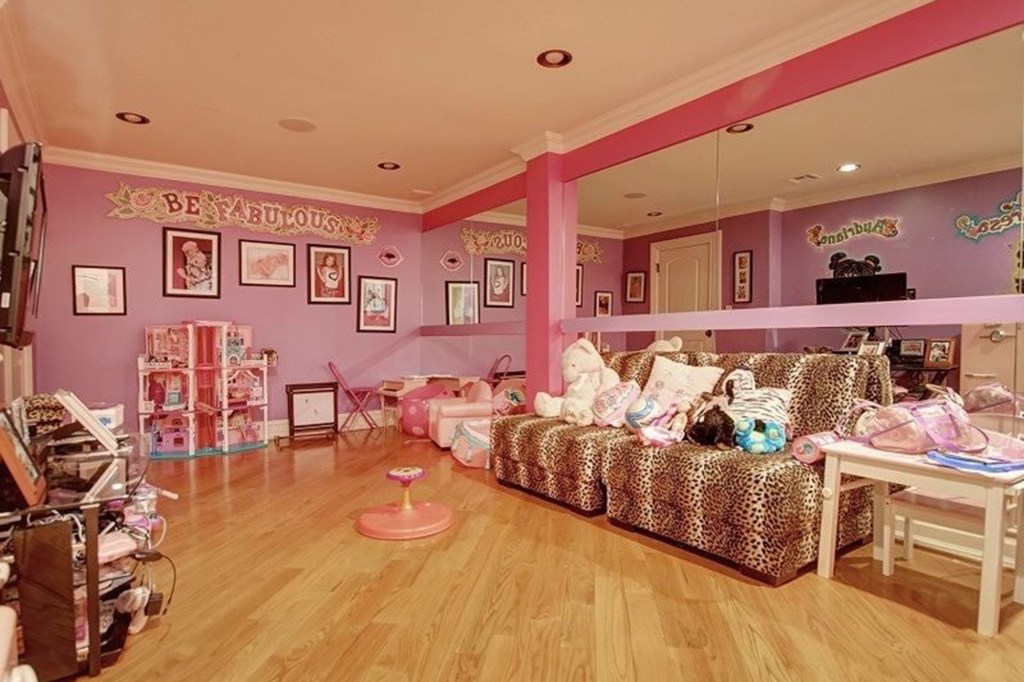 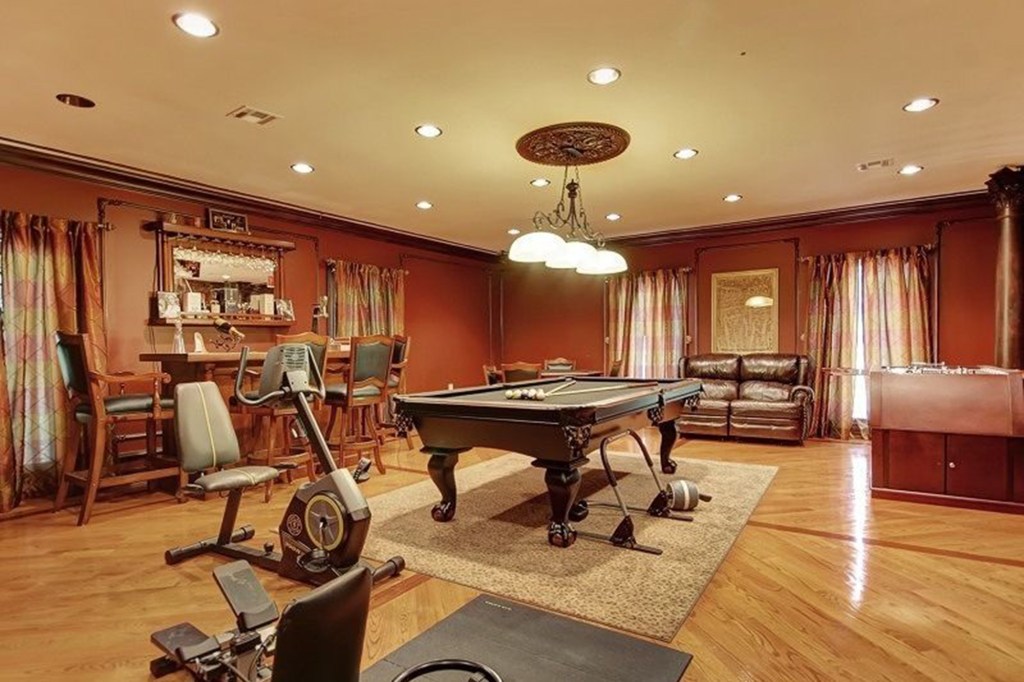 The price cut comes as the divorcée moves on from her two-decade marriage, sharing pictures with her new boyfriend, Digital Media Solutions co-founder Luis Ruelas, age 46. 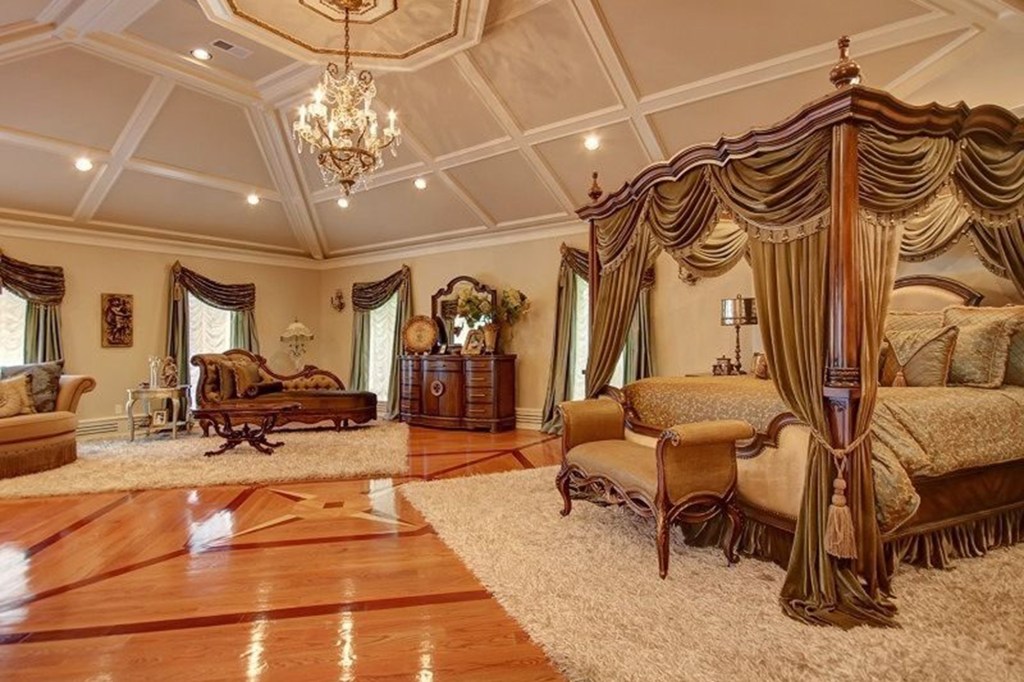 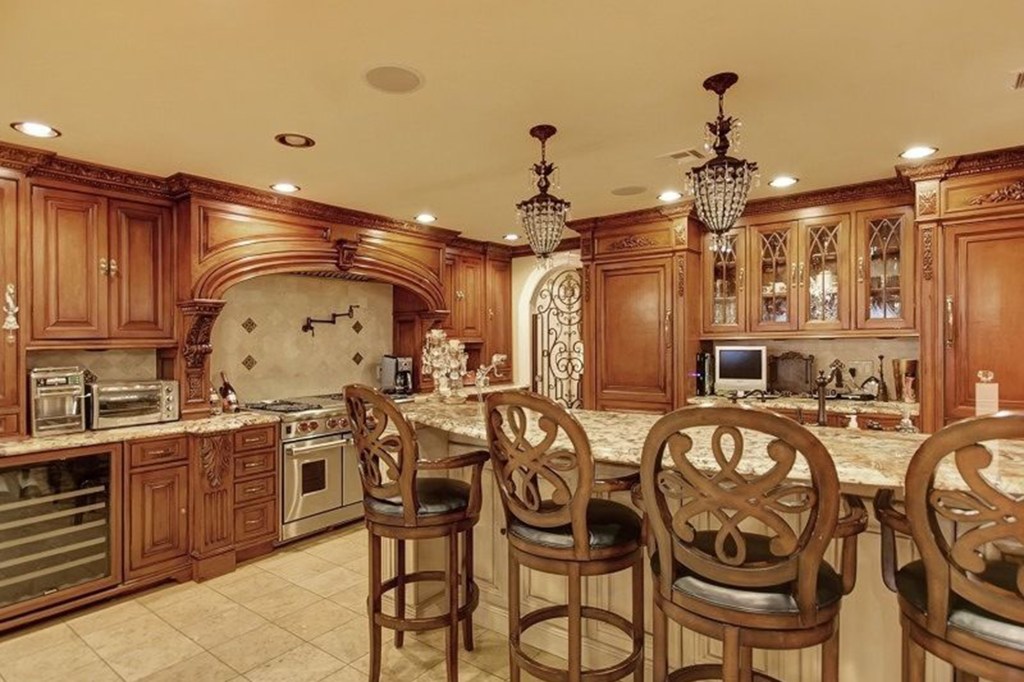 As is fitting for the author of hit-cookbook “Fabulicious!”, Giudice’s kitchen is decked out with stainless steel appliances and a butler’s pantry. 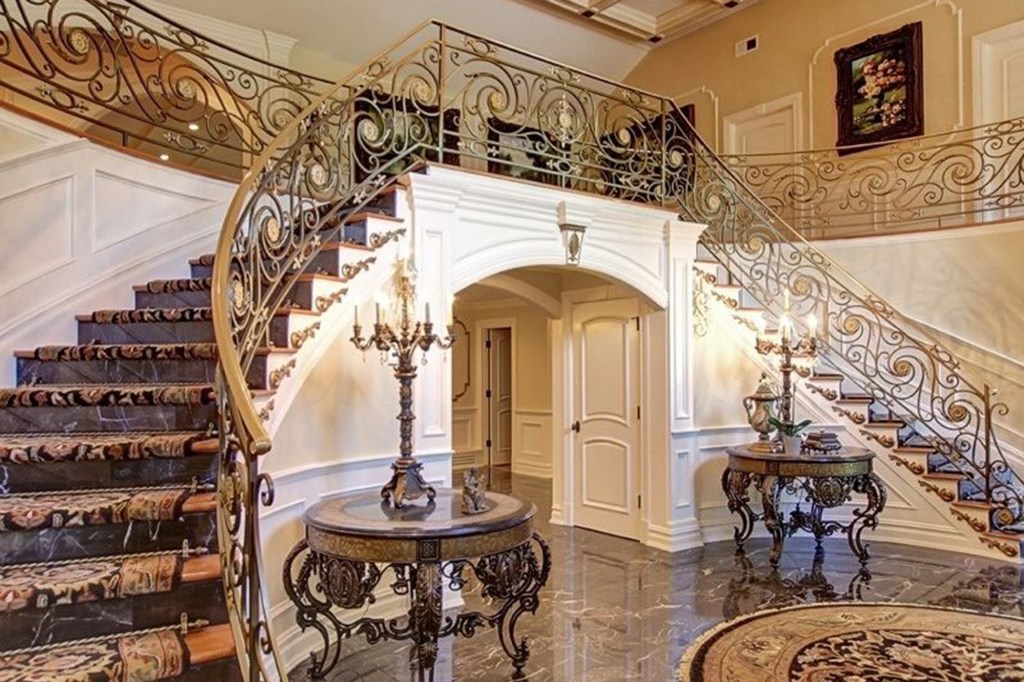 The entryway has a grand chandelier and vaulted ceilings, listing photos show.

The “Arrested Development” star was born in Brooklyn and raised…

Spanning almost 10,000 square feet, the home is situated on 3.7 acres and is made up of six bedrooms and five-and-a-half bathrooms.

Features of the home include a gourmet chef’s kitchen with stainless steel appliances and a butler’s pantry, a wine cellar, a Cinderella staircase and an in-ground pool. It also features a two-story great room with a wood-burning fireplace.

Earlier this month, Teresa revealed her decision to sell the house was bittersweet, but it was something she had to do to move on.

“It’s hard for me to sell the house,” she revealed on camera in a confessional. “[My ex-husband] Joe and I built the house together; we raised our four daughters in that home.”

“I am ready for a new beginning,” she said. “I’m looking for a fresh start.”

And a fresh start is exactly what she will get. Teresa has since moved on with her new boyfriend, Luis Ruelas.

It’s unclear at this time where Teresa and her four girls will move to next, while Joe remains in Italy.

22MbuyerfindsGiudiceHouseJerseyTeresa
0 129
Share FacebookTwitterReddItWhatsAppPinterestEmailFacebook MessengerLinkedinTumblrTelegramStumbleUponVKDiggLINEViberOK.ru
Subscribe to our newsletter
Sign up here to get the latest news, updates and special offers delivered directly to your inbox.
You can unsubscribe at any time

WHEN THE HEAVEN IS CLOSED BY DR. D.K OLUKOYA

I know you are kind, God will fight for you – Adeboye tells…

J&J blood clots: What to know about the potentially…

NFL to restrict unvaccinated coaches, staff from working with players

CDC probing death of woman who got Johnson & Johnson vaccine

‘Million Dollar Listing’ star Ryan Serhant wants to be your…