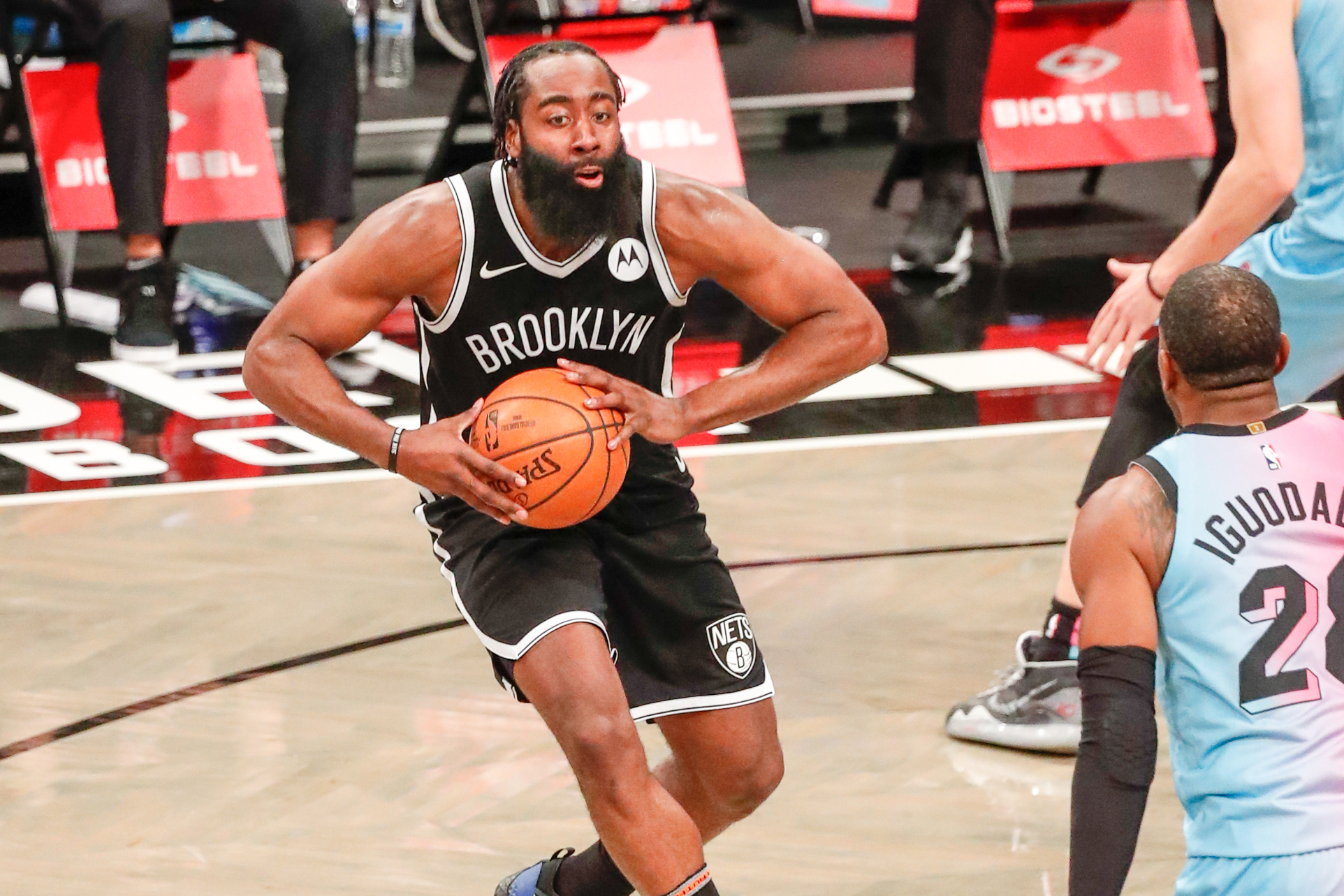 James Harden is taking fewer shots and scoring fewer points than he ever did in Houston. And he’s fine with that.

Harden had offended some teammates in Houston by publicly admitting the Rockets weren’t good enough to win. After forcing a mega-deal that paired him with Kevin Durant and Kyrie Irving, Harden said the Nets have so much talent around him that he can do less and still win more.

“It’s not really a change [of role] at all. I mean, it feels good not to have to score so much to give ourselves a chance to win a game,” Harden said. “I can go out there and just be a playmaker, shoot my shot when it’s available and get guys involved — and still have a chance to win the game. So, that’s a change.

“But for me, [it’s] just being the player that I am. Impacting the game in other ways other than scoring and just trying to be the best player I can be every single night on the court.”

Harden was nowhere near his scoring best Saturday. He had a modest 12 points, shooting 2 of 8 from the floor and 0 of 5 from deep. It marked his fewest attempts since Dec. 14, 2016, against Sacramento.

Yet, the Nets still won with Harden playing the role of facilitator, one he’s every bit as suited to as lead scorer. The points (23.6) and attempts (15.8) are both the fewest since 2011-12 — his last season in Oklahoma City, playing alongside Durant.

“I just want to come in and get a feel for what’s going on,” said Harden. “Obviously, I could be more aggressive offensively, but we have more than enough scorers and guys that can put the ball in the basket.

“[I’ve] just got to pick and choose my spots, which I feel like I’m doing OK. But facilitating, getting guys shots, getting our bigs finishes at the rim and just trying to be solid defensively is what I’m trying to do.”

Harden will go into Monday’s rematch with Miami averaging 12 assists for the Nets, up from the 10.4 he was posting in Houston before the trade. That’s on pace for a career-high, ahead of his league-leading 11.2 from 2016-17.

Even with his shooting touch off on Saturday, Harden still found ways to dent Miami’s zone defenses. He got into the lane and threaded perfect passes for 11 assists, grabbed seven rebounds and made big plays down the stretch, with four points in the final half-minute to ice the much-needed win.

“Where he’s invaluable is playmaking skills for us,” coach Steve Nash said. “So often, he found guys for layups or wide-open 3s and created and distorted the defense.

“So he wasn’t himself shooting the ball, and I think he’s still trying to get himself into shape. That was a tough little week for him, three games in four nights, including a double-overtime. So hats off to him that he found a way to contribute when his shot wasn’t going and his legs weren’t there. He still made a lot of plays for his team.”

While Harden can claim his conditioning is great, he’s clearly working himself back into peak shape. That’s impacted his defense, which was always porous at best. With few practices in the condensed NBA schedule, he’s got to have to play himself into shape in-game.

Harden has logged 41.4 minutes since arriving with the Nets, boosting his average to a league-high 38.2.

After playing 50:30 in Wednesday’s double-overtime marathon in Cleveland, he played both ends of the back-to-back against the Cavaliers and Heat. The more time he spends on the court with Durant and Irving, he’ll figure out game flow and when to assert himself offensively.

0 15
Share FacebookTwitterReddItWhatsAppPinterestEmailFacebook MessengerLinkedinTumblrTelegramStumbleUponVKDiggLINEViberOK.ru
Subscribe to our newsletter
Sign up here to get the latest news, updates and special offers delivered directly to your inbox.
You can unsubscribe at any time