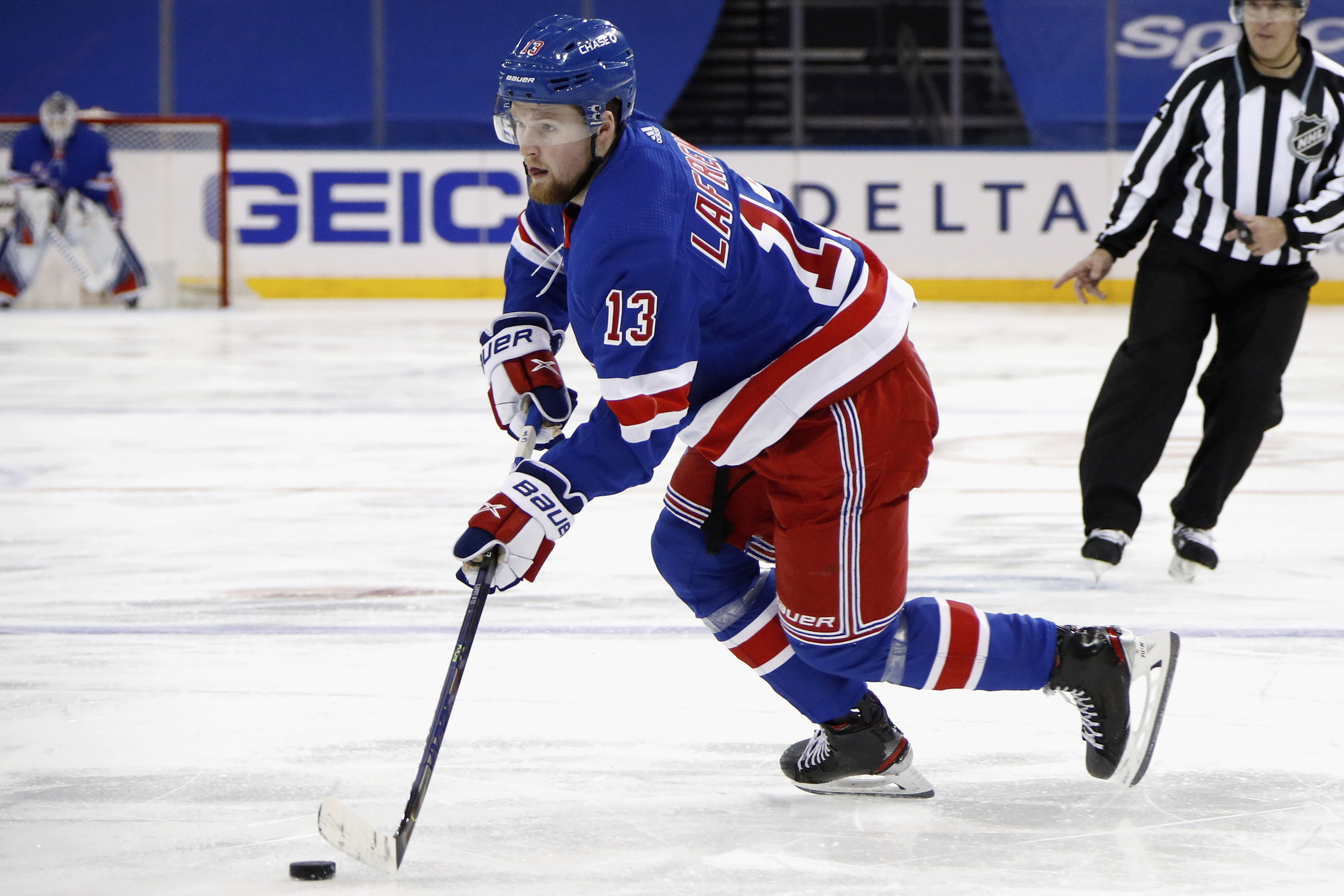 It was simply unavoidable for Alexis Lafreniere to be compared to Penguins star Sidney Crosby on his journey to becoming the first-overall pick in the NHL more than three months ago.

Crosby, the No. 1 pick in 2005, was the first player to be named Player of the Year in the Canadian Hockey League twice. Lafreniere was the second. Both players also played for the Quebec Major Junior Hockey League’s Rimouski Oceanic.

On Friday, Lafreniere got to face Crosby for the first time while skating on the Rangers’ first line with Mika Zibanejad and Chris Kreider. Crosby skated on Pittsburgh’s top line.

Getting first-line minutes for the first time against Crosby and the Penguins must have been surreal for Lafreniere, but it was also likely a wake-up call. Lafreniere, Kreider and Zibanejad were on the ice for two of the Penguins’ three regulation goals in a shootout loss. Though Lafreniere didn’t register a shot, Zibanejad had four and Kreider put one shot on goal.

“I thought that line had some good moments,” Quinn said Friday of the top line. “Alexis continues to do good things, and he’s going to continue to get better. It’s Game 4 into his NHL career. I just love his passion, his enthusiasm, before the third period him and Kreider are talking about he’s going to get his first point.

“I just like a lot of the things that he does. And again, he’s learning on the go. That’s not easy to do in this league. It’s just fun to watch him continue to work at his game and very coachable, wants to learn.”

It was the first game this season that Kreider was moved to the right wing, his off-side, to ensure that Lafreniere was back in his natural position at left wing.

“I mean, wing is wing, especially the way that we play defense,” Kreider said. “You come back through the zone, sometimes you’re on the right, sometimes you’re on the left. I think our line probably chased it a little bit more than we wanted, same side we were staring down the barrel of 87 [Crosby] and 58 [Kris Letang] all night, and those guys are pretty good players in their own right. I’d like to say we didn’t give them a lot, but obviously we gave up two pretty important goals when we were on the ice.

“A big part of playing a good real game is playing up against those tough matchups and limiting their chances. I thought we did that for the most part, played a little bit too much defense and didn’t get enough riding time in the O-zone. But you’re going to have those games and you need to weather the storm, and it’s unfortunate that we weren’t able to keep them off the board when it mattered the most.”

With an assist on Adam Fox’s power play goal in Friday’s loss at Pittsburgh, Artemi Panarin collected his 100th point in his 73rd game with the Rangers, breaking the record for the fewest games to 100 points. Mark Messier had done it in 74 games.

0 28
Share FacebookTwitterReddItWhatsAppPinterestEmailFacebook MessengerLinkedinTumblrTelegramStumbleUponVKDiggLINEViberOK.ru
Subscribe to our newsletter
Sign up here to get the latest news, updates and special offers delivered directly to your inbox.
You can unsubscribe at any time

Rangers give returning fans a gift: Blowout win over Bruins

With NFL TV deals in sight, how much will Amazon pay?

Rangers give returning fans a gift: Blowout win over Bruins

Deshaun Watson is willing to lose millions sitting out for…