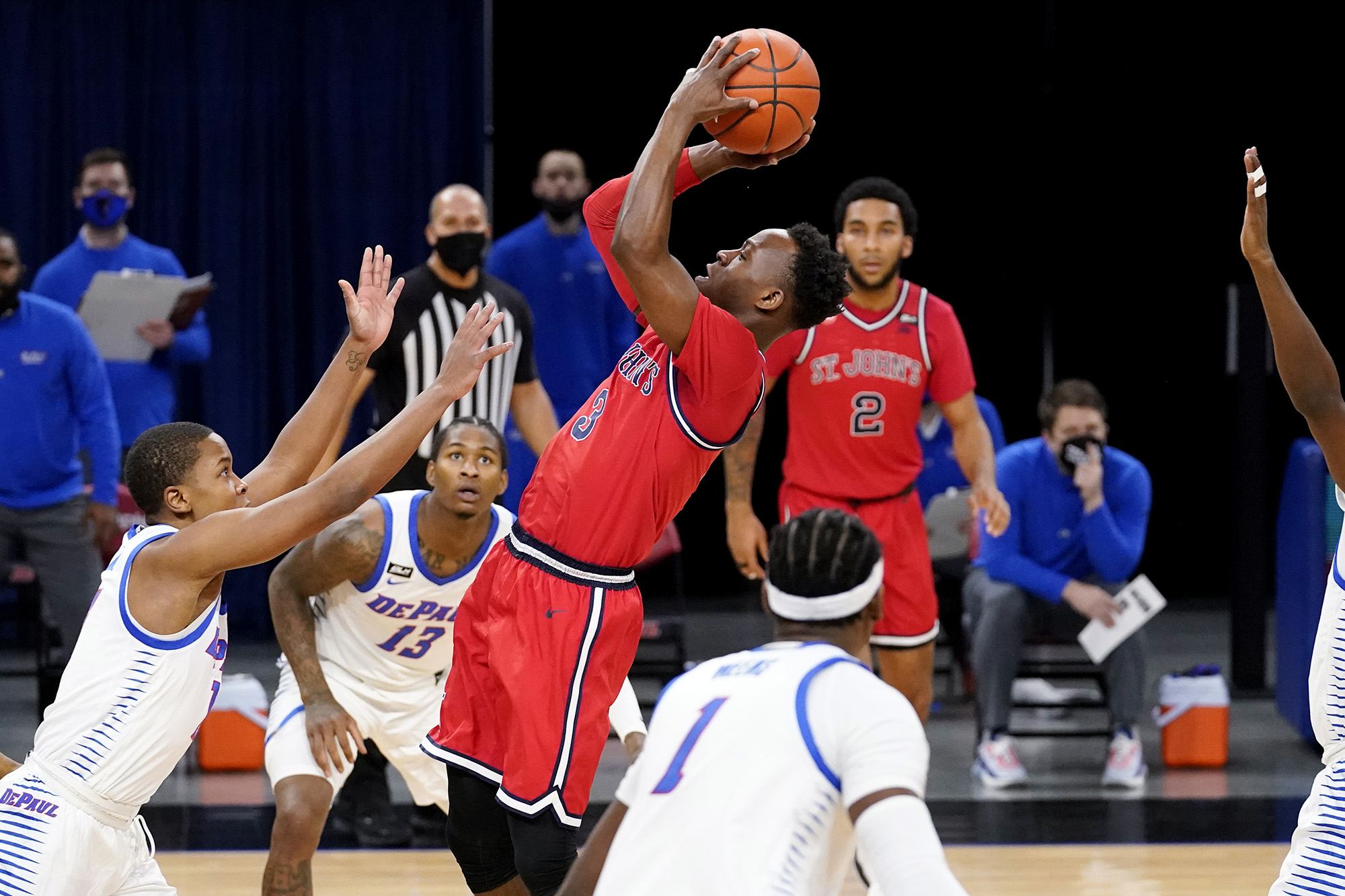 The road wasn’t just a challenge for St. John’s. It was a cement road block completely covering the road — there was no getting around it.

After an 18-point loss at Creighton on Jan. 9, the Johnnies had lost 15 of their last 16 conference games on the road. Under coach Mike Anderson, it was 12 of 13 setbacks.

Then, like flicking a switch, everything changed. St. John’s rallied from 14 down to beat Connecticut on Jan. 18. It hasn’t lost on the road since, ripping off four straight victories away from Queens — it last did that in 1999 — and six overall, playing its way into the NCAA Tournament picture.

“[We’re] just attacking the game with an imposing-our-will mentality,” senior guard Rasheem Dunn said. “Hitting first rather than being hit and then trying to hit back late in the game.”

Winning on the road is obviously different this year. There are either no crowds or they are extremely limited. Yet, St. John’s (13-7, 7-6) did start 0-4 in the Big East on the road.

The big change has been the team’s starts. As Dunn referenced, the Johnnies aren’t letting their opponent strike first. In the last three contests away from home, St. John’s has built big leads. It has been ahead at halftime in all three games, against DePaul, Marquette and Providence. In each instance, the home team rallied, but St. John’s didn’t wilt, responding with resolve and poise. In this four-game road win streak, it is shooting 41.7 from 3-point range and 77 percent at the free-throw line. It is forcing 14 turnovers per game and holding the opposition to 41.8 percent shooting from the field.

“Having energy from the start [has been key],” said Dunn, who is coming off arguably his best game of the year, a 13-point, 10-assist performance.

So much has changed for St. John’s during the recent streak. It was close to the bottom of the Big East when it began, completely off the national radar. Now it is just a game out of fourth place in the conference and firmly on the NCAA Tournament bubble entering Tuesday night’s trip to Butler.

Coach Mike Anderson was pleased with how his team performed following the upset of then-No. 3 Villanova, by taking a big early lead over Providence and controlling the final 10 minutes. There was no letdown or overconfidence. St. John’s, Dunn said, isn’t thinking about the NCAA Tournament or even discussing it. Anderson won’t allow it, stressing the need to stay humble and not forget what has led to this recent winning stretch — defense, effort and unselfishness.

“Don’t get giddy [is our mindset]. It’s approaching these games with a winning mentality, going out there and playing hard, sticking to our identity, which is defense,” Dunn said. “I feel like we’re all mature enough to understand what is going on right now, and not being humble can easily turn around and work against us.”

Freshman point guard Posh Alexander was named the Big East’s Freshman of the Week for the third consecutive week after averaging 18.5 points, five assists, two steals and hitting five-of-nine 3-point attempts in victories over Villanova and Providence. He has won the honor four times and has emerged as the heavy favorite to be named the league’s freshman of the year. The last St. John’s player to win that award was JaKarr Sampson in 2013.

0 62
Share FacebookTwitterReddItWhatsAppPinterestEmailFacebook MessengerLinkedinTumblrTelegramStumbleUponVKDiggLINEViberOK.ru
Subscribe to our newsletter
Sign up here to get the latest news, updates and special offers delivered directly to your inbox.
You can unsubscribe at any time

Super Eagles might travel by boat for AFCON qualifier…